I am often required to create some very specific charts for clients that are far outside of the capability of regular Excel charting functionality. I use VBA to create these custom charts in a dynamic way to visualise outputs of mathematical modelling. These outputs are important to clients as they allow them to view the complex outputs in simple, familiar ways.

I have in the past created L-Shaped Graphs for clients that helped optimise the use of space for a dynamic Excel Dashboard that needed to be constrained to an A4 print out.

More recently, I have been required to create a custom ‘March Chart’ that plots the movements of different work crews over space and time. I received a print out of an old ‘March Chart’ that had been manually created by the client, and was asked to replicate it exactly in Excel so that it could be viewed as an output of a mathematical model.

THE POWER OF SCATTER PLOTS

When creating a custom chart in Excel, you must use one of the existing charts as a template. This template can then be twisted and abused into doing what you need through tricks and manipulation within VBA.

For the March Chart project, I discovered just how very useful a scatter plot can be as the template for an advanced Excel chart. The scatter plot can be thought of as a blank canvas on to which x,y data points can be plotted. Each data point can then be joined by a line to another data point, creating a straight line. A series of sequential data points with straight lines joining them called a ‘data series’ can be used to create paths and even ‘curves’. With this functionality in mind, you essentially now have a blank canvas that you can draw anything on in Excel with VBA!

This all seems far too good, so Excel had to put some barriers in our way to make it a little trickier.

o Split the data series into multiple data series. If you make the two data series the same colour, and begin the second data series at the last point of the first data series then they will appear to be a continuous line. This is a good option if you are not close to the limit of data series, however can create more issues to overcome as an additional legend entry will be created.

o For any data series that has more than 255 potential data points, skip over every second, third, etc. depending on the actual number so that the number of data points implemented to the actual plotted data series remains under 255. This is my preferred method as no additional work is required in fixing the legend and is in my opinion neater.

The following is an example output of the March Chart showing different colours for different work crew types. You can track the geographic location over time of each work crew very simply with this visualisation. 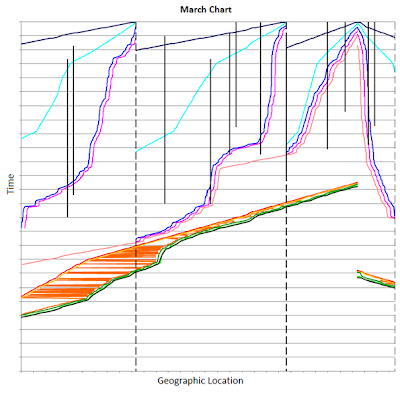